In some cases, a traumatic injury, such as a car wreck or torn earlobe, is the cause of ear deformities. However, many babies are born with large ear lobes, protruding or drooping ears, or even ears with missing cartilage.

While these abnormalities usually don’t affect a person’s hearing, they can still significantly impact their quality of life. For example, patients of all ages with misshapen ears often experience social anxiety, while school-aged children may become more vulnerable to teasing. If you or your child has uniquely shaped ears, an otoplasty, or ear surgery, could be the solution.

Otoplasty, or cosmetic ear surgery, is a very common facial plastic surgery procedure. The goal of an otoplasty is to give the ears a more natural shape regarding projection and size while also restoring balance and proportion to the face overall.

The procedure is frequently performed to correct protruding ears, which may first become apparent in the first few years of life. In fact, psychologists have found that the physical appearance of the ears can have a strong impact on the psychological development of children. Occasionally, children may develop only one protruding ear or a floppy ear, commonly called “lop ear.

An otoplasty in Miami can be done on patients as young as four years old, and of course, at any time for adults. Dr. Bustillo customizes his approach for otoplasty surgery based on each patient’s unique anatomy and specific goals for treatment. If you’re unhappy with the size or shape of your ears, otoplasty may be a good choice.

Otoplasty Before and After Photos 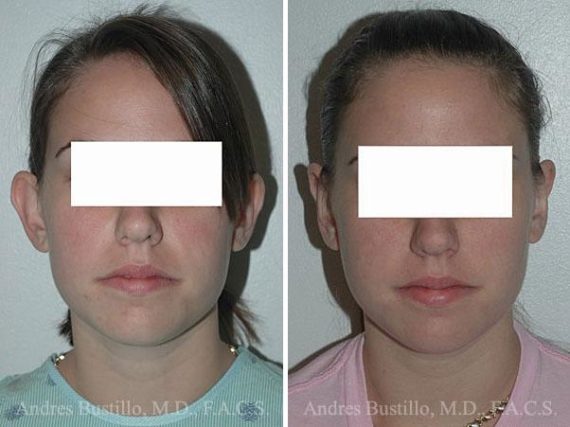 * Each patient is unique and individual results may vary.

About half of the patients who undergo the otoplasty operation are children. Parents are often confused about the timing of otoplasty surgery in children, however.

Ideally, the surgery should be performed between ages five and six. At this age, the ear is fully developed and the child is about to start school. This is important because it is during this time that the child begins to develop self-esteem. It is also the age at which he may be teased at school.

The doctor will then review various before and after pictures of patients that have undergone the otoplasty surgery with him. The goal in otoplasty is to bring the ears closer to the head and lessen any asymmetry between them, so as to remove the focus from the ears.

The otoplasty procedure is performed via a small incision behind the ear. If the ear is missing the anti-helical fold, then Dr. Bustillo will place several permanent stitches through the ear cartilage. When these stitches are tied, they create the anti-helical fold and change the shape of the ear.

When the fold is created, the ear will come in towards the head. The anti-helical fold should not be made by cutting any cartilage. This can lead to an ear deformity.

If the conchal bowl is too large, then it is carefully shaved and brought in closer to the head with permanent stitches. In most otoplasty procedures, a combination of both of these procedures is done to bring the ear closer to the head. It takes Dr. Bustillo about one and half hours to perform the otoplasty.

The patient should spend the night of the surgery resting in bed. It is best that the patient keep a liquid diet for the first night. The head should be kept elevated with two pillows.

The majority of patients that undergo an otoplasty procedure with Dr. Bustillo do not have any pain or discomfort. A prescription for pain medicine is given just in case.

Dr. Bustillo will see the patient the following day in the office and remove the bandage. A removable elastic bandage will be placed over the ears. This should be kept on at all times for the first 3 days after the surgery.

From then on, the patient should wear the bandage only at night for the following 7 days. The patient will then be seen 10 days after the surgery to have any of the remaining absorbable stitches removed (the ones that have not been absorbed).

Dr. Bustillo is absolutely incredible and truly has an eye for practical beauty. I was able to get a consultation for an otoplasty procedure the same week that I called, and upon first meeting Dr. Bustillo, I immediately felt comfortable with trusting him for the procedure. I was also very pleased with everyone who worked in the office, as they were very attentive and organized. I actually had a last-minute event come up which conflicted with my scheduled surgery and I was able to reschedule my surgery without any hassle. I've had other procedures done with…

Potential Risks and Complications of Otoplasty

As with any surgery, there are possible complications. Although rare, bleeding after an otoplasty can occur, especially if the patient took medications that affected coagulation.

If this occurs, the incision is opened, any bleeding stopped and the dressing is replaced. The wound can become infected.

This is also a rare occurrence, as Dr. Bustillo administers antibiotics before, during, and after the otoplasty. If an infection occurs, stronger antibiotics are given.

WHY ARE MY EARS BIG?

Ears can protrude from the head for two main reasons or a combination of the two. The most common reason ears can protrude is due to the absence of the anti-helical fold. The anti-helical fold fails to form during the growth of the ear, and as a consequence, the ear protrudes.
The second reason is if the conchal bowl, the part of the ear that forms a “bowl” is enlarged. The reality is that most protruding ears have a combination of the two.

WHY DO SOME EARS LOOK TOO PINNED BACK?

The reason that some ears look “too pinned back” is that the surgeon either does not have an idea of what a normal ear should look like or made an error during the surgery. Dr. Bustillo is well-known for his natural-looking and conservative results. He will provide a result that looks natural and places the ear in the right position.

WHO IS THE BEST CANDIDATE FOR THE PROCEDURE?

Good candidates for otoplasty include individuals who are physically healthy, realistic in their expectations, and interested in improving the appearance of their protruding ears. The procedure is often performed on children between the ages of five and fourteen. Otoplasty is also often performed on adults.

ARE THERE ANY AGE RESTRICTIONS FOR WHO CAN UNDERGO SURGERY?

Dr. Bustillo performs the otoplasty procedure on children beginning at age five. The reason for performing the procedure at age five is two-fold.
One, the children’s ears have developed by this age. Two, the children enter grade school at this age and may be teased or picked on. Having the surgery before entering grade school will avoid this situation.
Dr. Bustillo also performs the procedure on healthy adults that have protruding ears.

WHERE IS THE PROCEDURE PERFORMED?

WHERE ARE THE INCISIONS MADE?

The incision for the otoplasty procedure is typically made just behind the ear in the natural fold where the ear meets the head.

ARE THERE SCARS AFTER THE PROCEDURE?

The incision made for otoplasty will not be noticeable after it has healed.

IS IT A PAINFUL PROCEDURE?

Most patients experience some mild discomfort the first night. This is well-controlled with mild pain medication.

Dr. Andres Bustillo is a dual board-certified facial plastic surgeon in both facial plastic and reconstructive surgery and otolaryngology-head and neck surgery. Dr. Bustillo has been in private practice in the Miami area for over ten years and is well known for his natural and conservative results.

Some of Dr. Bustillo’s training and certifications include:

If you think you or your child could benefit from otoplasty surgery, then the next step is to schedule a consultation with Dr. Bustillo. To make an appointment at our Miami office, call 305.317.1960 today.

More questions about your otoplasty procedure? View more Otoplasty before and after photos